The Ashes of the Millions

Talk given at the Brotfabrik (Frankfurt) on the 12th September 2016 on the occasion of Webmontag #81. 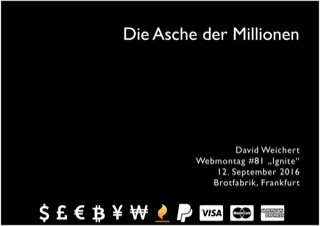 Today I will talk about burning money. Not in a metaphorical sense, but about the actual burning of paper money. 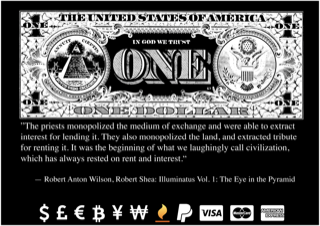 Money is unlike most other things. It is nothing but paper and metal coins and most of the time not even that, but today it is mostly a number on paper or in a computer. 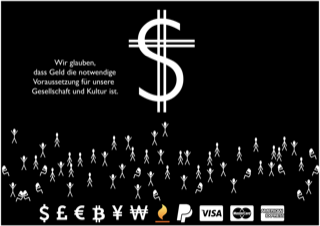 The term fiat currency was chosen well by economists. Our money is not based on a physical value, but sola fide, by faith alone. We do not believe in the value of money, but that it is essential for our society and culture. And first and foremost we believe that everybody else believes in it as well. 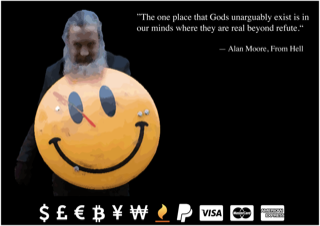 On the 5th of March 1996 the film ”Watch the K-Foundation Burn a Million Quid“ was shown at Alan Moore's house. The film was shown at art institutes, schools, and public venues, also at more unusual places, such as prisons and stone-age cult sites. But it was the first and only time it was shown to a specific person privately. Alan Moore – the Author of ”V for Vendetta“ and ”Watchmen“ – has Jack the Ripper say in his book “From Hell”: “The one place that Gods unarguably exist is in our minds where they are real beyond refute.” It is the same with money. The only place where its value and meaning are not virtual is our mind. There it exists in its grandeur and monstrosity. 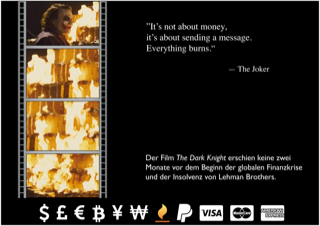 Immediately before the global financial crisis started in September 2008 the film The Dark Knight premiered in cinemas. In it the Joker burned a huge pile of cash. A great spectacle, presented to the audience as the deed of what is obviously a madman. 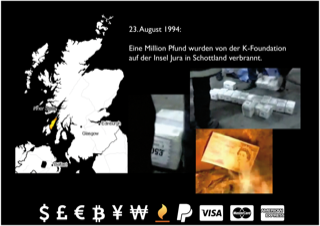 On the 23rd August 1994 the journalist Jim Reid was collected from his hotel room by Bill Drummond and Jimmy Cauty. The two had a suitcase with a million pounds in cash with them. To get this amount of money to a small island in the west of Scotland was not easy. It was half past twelve at night and it was raining. 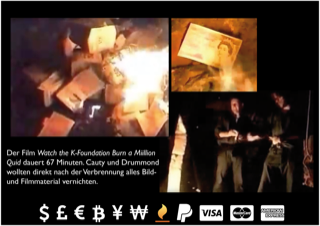 The three drove with the money and Gimpo, their cameraman, to a boathouse at the other end of the island. There they filmed the 67-minute film about burning the million in the fireplace of the house. Fishermen found 1500 pounds, some of which had escaped singed but otherwise intact through the chimney, in the following days, which they handed over to the police, which found the notes genuine. 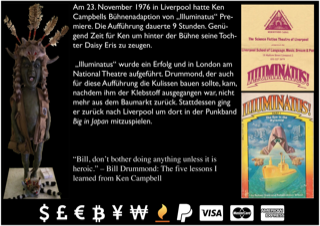 On the 23rd of November 1976 Robert Anton Wilson's book Illuminatus premiered as a play by Ken Campbell. Bill Drummond was 23 years old and had created the stage sets for the play. Campbell had told Drummond that everything he did needed to be heroic, or else he did not need to bother. Until today it is not clear, whether this was only meant to apply to stage sets. The play was a success and was brought to the National Theatre in London. Drummond build the stage sets there too. When he went to the shops one day to get some Araldite, he did not return. Instead he went to Liverpool to play in a Punk band. 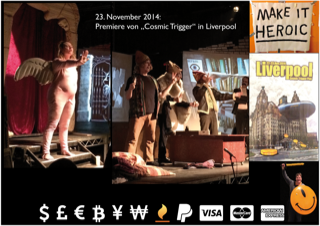 On a rainy Wednesday in November 2014 I was splashed by a careless car driver ploughing through a puddle whilst waiting for the bus. I read an article in the Guardian by Bill Drummond about what had happened in Liverpool in 1976: The Five Lessons I Learned From Ken Campbell. After reading the article, I bought a ticket for the theatre and went to Liverpool. On the 23rd of November 2014 I attended the premiere of Cosmic Trigger brought to the stage by Daisy Campbell, Ken's daughter. 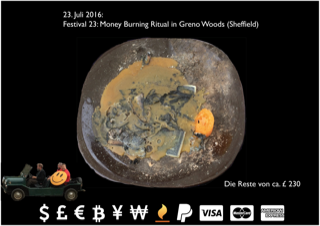 Almost two years later on the 23rd of July 2016 I was in a field near Sheffield. There I witnessed about a dozon people burning c. 230 pounds. The ritual affected me more then I had anticipated. I decided, to get some professionals involved and contact a central reserve bank. 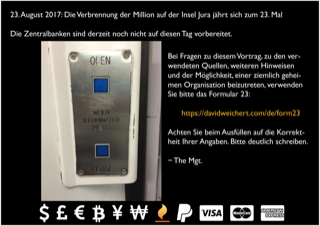 Am 23. August 2017 ist der 23. Jahrestag der Verbrennung der Million Pfund. On the 23rd of August 2017 is the 23rd anniversary of the burning of the million pounds.

The central reserve banks are unprepared.

If you want to help me with the central banks please get in touch after the talk or follow the hidden clues left all over the place. Later there is the opportunity to join a fairly secret organisation. Copies of Form 23 are available in the foyer.